Login or Sign Up
Make a Reservation
Reservation Search
BEYOGLU 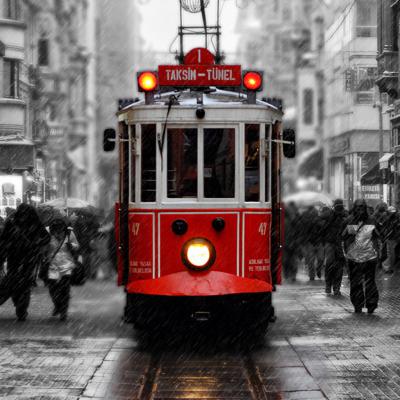 Flower Passage & Fish Bazaar (Sahne Street) The Flower Passage dates back to 1870s Tanzimat Reform Era. A theater building took place at that time where the passage is located in now. The building was burned with the big Beyoglu fire in 1870, and then today’s passage was built by the Rum banker Hristaki Zografos Efendi. Since the passage turned into a place in time where the florists met and made auctions at that time, the place was named “Flower Passage”. The taverns and beerhouses opened after 1940s are still giving service today.

Galata Tower Galata Tower is one of the oldest towers in the world and was built by Byzantine Emperor Anastasius as a lighthouse in 528. It was used as a fire tower during Ottoman Empire. In the first half of 17th Century, in IV. Murat Period, Hezarfen Ahmet Çelebi practiced to fly by observing the wind in Okmeydani, and then he flied from the top of Galata Tower through Üsküdar-Dogancilar direction by wearing wooden wings on his back in 1638. His flight arouse Europe’s interest and some prints describing the flight was made in England. The tower has a spectacular Istanbul view and it is one of symbols of the city. It is open in every weekday.