Login or Sign Up
Make a Reservation
Reservation Search
KAS 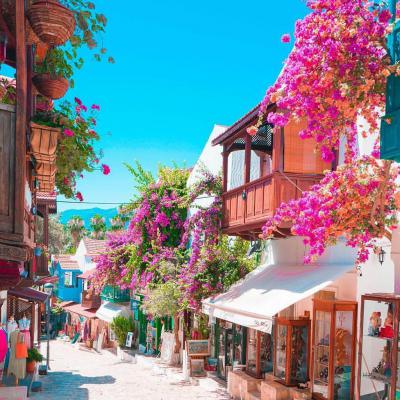 The Heart of Lycia

It is the 4th largest district in the western part of Antalya. It is the most important region of the Lycian civilization according to the findings obtained from the excavations conducted in the region. It is known that the Teke Peninsula have been settled since the 6th century B.C. There is a large number of rock tombs both in the center of the town and on the slopes of the hills around the surrounding villages. The old name of Kaş is Antiphellos. Today, there is an ancient theater with the same name in the city, which is a great spot for watching the sunset. The ancient cities of Komba, Nisa, Kandyba and Phellos are other historical places you can see in the region. Güvercinlik Cave and Blue Cave are among the natural beauties to be seen in Kaş.

Kekova; Kekova, which you can see by taking a boat tour, is perhaps the most beautiful and remarkable attraction in the region. A unique sea, a sunken city and gorgeous bays… An unforgettable experience awaits you at every stop along the boat tour.

Kaputaş Beach, is perhaps the most famous of Antalya’s splendid bays. It is always listed among the most beautiful coves of the world with its photographs of sparkling sand meeting with white foams and a turquoise-colored sea. The delightful bay on the Kaş-Kalkan road is 20 km from Kaş and 7 km from Kalkan. The Kaputas Beach lying in an impressive canyon surrounded by cliffs, is among the rare natural beauties of our country with this feature. The water is generally cold due to the spring water flowing from the mouth of the canyon and draining through the sand on the sea shore. The sea is wavy, and thus, is rather fun. The beach, which is reached by descending 187 steps, is visited by thousands of local and foreign tourists every year. The view over the road is also fascinating.

Xanthos Antik Kenti; The ancient city of Xanthos, which was inscribed in the UNESCO World Heritage List in 1988, was a region inhabited by the Lycian people, and gained importance after the Persian rule. It has been integrated into Roman and Byzantine Empires respectively and is the major archaeological site that is a must-see in Kaş today.