Login or Sign Up
Make a Reservation
Reservation Search
MARMARIS 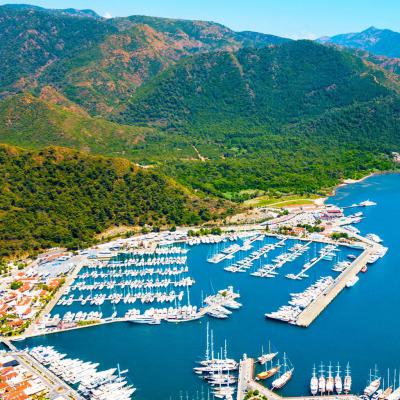 The Popular Site of the Aegean Shores

Marmaris in southwest Turkey is a port town located at the point where the Aegean meets the Mediterranean. It is one of Turkey’s most important tourism centers and the largest resort in the Aegean shore. With its natural beauties, long coastline, pine-forested hills and magnificent scenery, it welcomes thousands of tourists every year. Marmaris is a region largely preferred by sea resort vacationers since it has dozens of beautiful beaches. Its distance to Rhodes Island is 45 minutes. It hosts many ancient cities dating back to 1200s B.C. such as Physkos, Amos, Bybassos, Kastabos, Syrna and Loryma. It is the area that receives the greatest quantity of rain after Rize due to the position of the surrounding mountains. The attractions worth visiting are the Marmaris Castle, one of the leading historical places with its magnificent sea view, the Cleopatra Island, located about 16 km to Marmaris, the ancient city of Loryma, whose history dates back to the 12th-century B.C. and Selimiye, which houses one of Turkey’s leading marinas, the Sığliman Bay.