Login or Sign Up
Make a Reservation
Reservation Search
MURATPASA 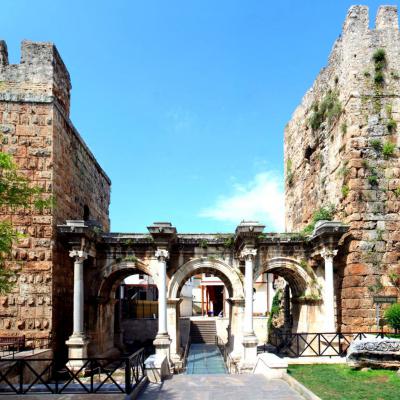 The mosque is located in the district of Muratpaşa, the earliest settlement of Antalya, today called Kaleiçi. The district is home to many important historical monuments such as the historical houses of Kaleiçi and the Balbey neighborhood, some of which have been restored, the Gate of Hadrianus, built in honor of the Roman Emperor Hadrianus, who visited Antalya in 130 A.D., which the locals call the “Three Gates,” and the Fluted Minaret, which has been the symbol of Antalya since the 13th century. Besides historical monuments, it hosts magnificent natural sceneries, the Düden Waterfall and the famous Lara Beach. Muratpaşa offers you not only a holiday to enjoy and relax but also to experience various cultural excursions.