Login or Sign Up
Make a Reservation
Reservation Search
SERIK 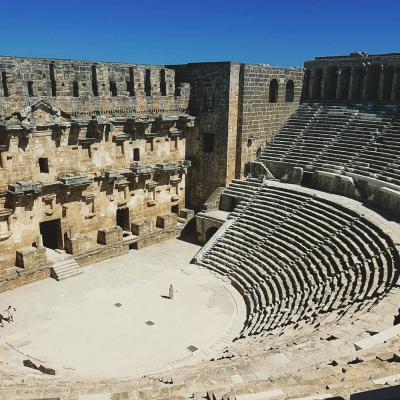 Aspendos: The Most Durable Example of Roman Theaters

The first settlement in Serik, which lies 40 km east of Antalya and has a coastline of 22 km long, was founded in the 2nd century A.D. Sillyon near Yanköy and the Belkıs Village has two ancient settlements ruled by the Pergamene Kingdom. More recently, Serik has been inhabited by the Turks of Western Thrace and Crete during the Balkan War and the Cretan War. The leading touristic attraction in the district is Belek on the coast. It is renowned for its world-famous golf facilities and luxurious hotels. There are more than 50 5-star hotels in Belek, which welcomes 3 million tourists per year. Another lively town located on the extension of the Belek beach is Boğazkent, which is quite active with its summer houses and touristic facilities. The Uçansu Waterfall located in the Akçapınar village of Gebiz and the Zeytinlitaş Cave in the Akbaş Village are must-see natural wonders. Besides tourism, Serik also has historical significance housing archaeological sites such as Aspendos, Sillyon and Perge.