Login or Sign Up
Make a Reservation
Reservation Search
SIDE, MANAVGAT 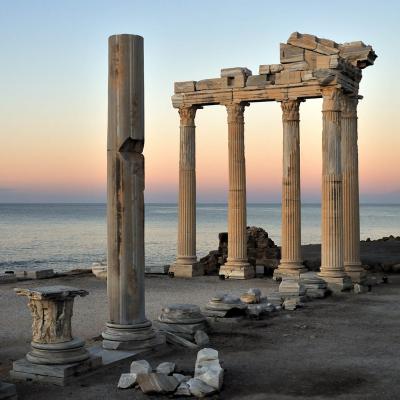 Located 75 km from Antalya and 7 km from Manavgat, Side is about 400 m wide and 1 km long. In ancient times it was the most important port city of the Pamphylia region with a history dating back to the 8th century B.C. Side means “pomegranate” in Anatolia, a name that derives from Luwian. It is a charming holiday resort with its archaeological remains of the ancient city, its unique architecture, crystal clear sea, unpolluted beaches and comfortable hotels. The ancient city of Side is quite rich in terms of the archaeological remains that survive up to day. The Side Antique Theater is a unique example in Anatolia in terms of its architectural features. Built in accordance with the Roman architectural tradition, the theater has a three-storey stage. The decorational friezes display the baroque features of the Antonine period. Other historical buildings that can be seen in Side are the Agora, the Agora Bath (the Archaeological Museum of Side), the Vespasian Fountain, the Monumental Gate, the Victory Monument, the Temples of Dionysus, Apollo and Athena, the Southern Basilica, the Grand Bath, the State Agora, the Baptistry, the Episcopal Palace and Basilica.