Login or Sign Up
Make a Reservation
Reservation Search
SULTANAHMET 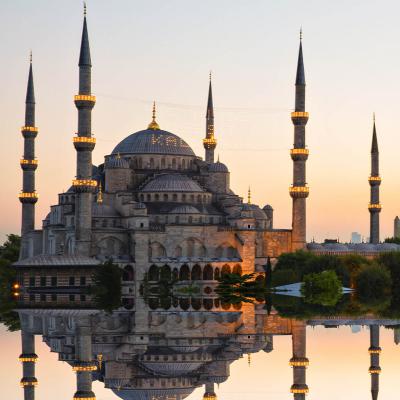 Traces of History in Every Corner

When you don’t pass to Anatolian Side from Karaköy and change your route to the direction of Eminönü, you can see the historical mosques, Spice Bazaar, Grand Bazaar, Tahtakale, and then after eating fish sandwich on the shore, you can find yourself in Sultanahmet eather by foot or by the tram.

Sultanahmet Square Sultanahmet Square is the most famous one in Istanbul. It is one the most magnificent squares of Turkey and also of the world. It was firstly built as hippodrome in 2nd Century during Roman Empire Period. The famous horse races and activities like music, dance, acrobatics were organized at that time, and then Haghia Sophia, Walled Obelisk, Obelisk of Theodosius, Serpent Column were built around hippodrome. The square has maintained its importance down the ages until today.

Haghia Sophia Haghia Sophia Museum is one of the most important members of world cultural heritage. It is located across Sultanahmet Mosque. The museum was built as a church, and after the Conquest of Constantinople, it was turned into a mosque. With the proclamation of the Republic Turkey, it has become a museum in 1935. Its construction was completed in 4. Century. The church was burned with fire in this period, and it was decided to build a new one. Haghia Sophia was built with bricks, stone and marble, and has 40 windows. The architects were mathematician Anthemios and Isidoros from Milet. The second construction was completed in 6th Century, and the church was a symbol of wealth both in political and in economical aspects. The parts you should see when you walk into Haghia Sophia are the Jesus and Virgin Mary mosaics taking place on south door, the mosaic of VI. Leon on the imperial door, the mosaics of Deesis and Komnenos in the upper gallery, the grave of Henricus Dandolo, the mihrab added afterwards, the şadirvan built in Sultan I. Mahmud period, shrine of Sultan II. Selim and the library of I. Mahmud.